Yes, I am a “Cooperative Program Recipient.” Born in Brazil of Latvian and German descent,  I was blessed since my early days by the generosity of thousands of small churches that came together to send missionaries and carry the work of the kingdom of God all over the world. When I left home to attend the South Brazil Baptist Theological Seminary in Rio de Janeiro, it was  Dan Sharpley, a missionary in Porto Alegre city, who gave me a copy of my first Bible concordance. When I returned to my hometown to pursue my Doctor of Ministry project,  it was Boyd Sutton, another SBC missionary, who did the required field supervision. When my wife Sophia and I attended Southwestern Baptist Theological Seminary , another seminary supported by the Cooperative Program, we were also supported by the Baptist Men of NC.  Men, like our own Harold Causby from FBC Shelby were extremely generous toward helping us finish our degrees.

Because of such a “cloud of witnesses” participating together in the Cooperative Program missions funding plan we helped establish three churches in the state of Sao Paulo– Cruzeiro, FBC Jaguariuna, and Carlos Lourenco in Campinas. In this same city , Campinas, Sophia served as the director of the local Divinity School where she served as a key person to reorganize and keep it from closing its doors.

These are just small examples of how much the Cooperative Program throughout the years has been used to advance the work of the Lord. 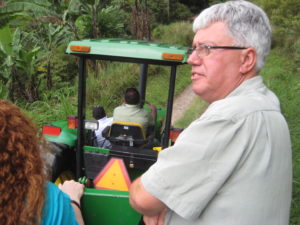 The book of Leviticus closes with these words: “A tithe of everything from the land, whether grain from the soil or fruit from the trees, belongs to the Lord: it is holy to the Lord” (Lev. 27:30, NIV).  It is holy; it is set aside. It is the Lord’s. By not tithing we are robbing God of that which is his. Also,in the book of Numbers we read: “When you receive from the Israelites the tithe I give you as your inheritance, you must present a tenth of that tithe as the Lord’s offering” (Numbers 18:26, NIV). In the OT the tithe belonged to the Levites because they did not receive an inheritance like the other tribes. They were to tithe the tithe received.

Likewise our churches should tithe all the tithes received. The Cooperative Program is a good way for this to happen. By giving through cooperative missions channels the church sets an example to its membership in several ways:

May the Lord help us as individuals and as a congregation to be found faithful in the manner of giving our tithes.