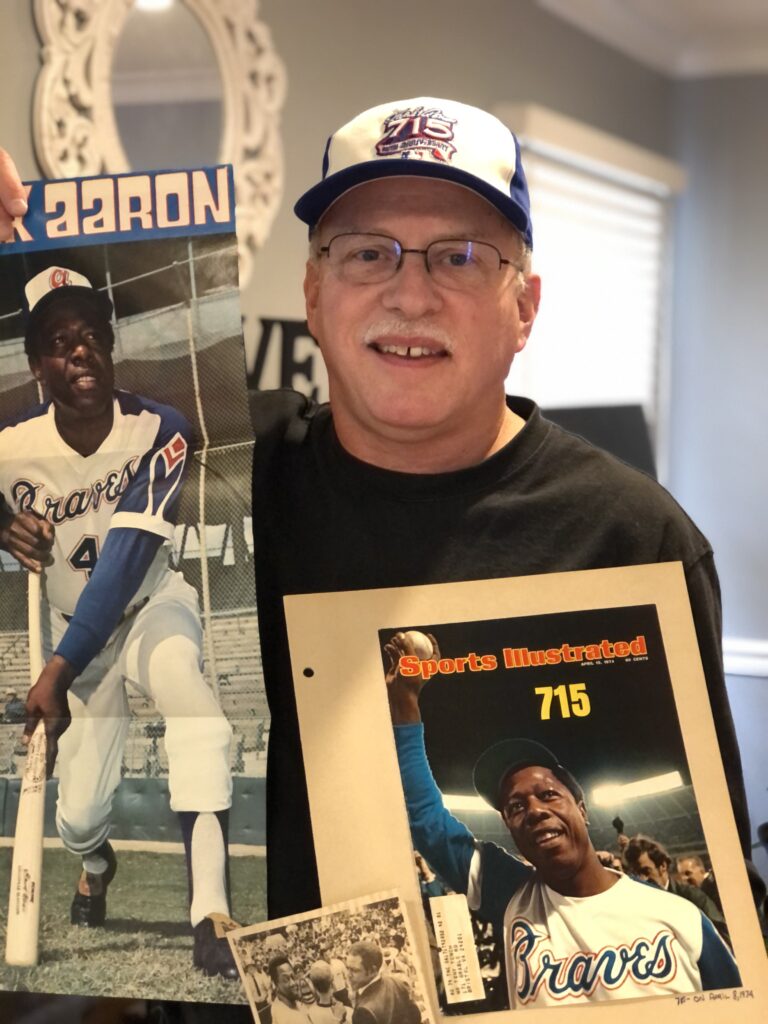 Today we learned about the death of Henry “Hammerin’ Hank” Aaron who played his Major League Baseball career with the Boston Braves, Milwaukee Braves, Atlanta Braves and Milwaukee Brewers but most of his time in Atlanta. Growing up and being a baseball fan, Atlanta was the nearest team to us, not to mention that many of our family members lived in Georgia, my Dad’s home state. That being so, I have been a Braves fan forever and especially a Hank Aaron fan.

On April 8, 1974, I was sitting alone in the basement of our house with my chair pulled up close to a small black and white TV watching as Aaron hit his 715th career home run to surpass Babe Ruth as the Home Run King! As the ball went over the fence, I was jumping up and down and I ran upstairs to announce that historic event. His death today takes me back to some exciting days watching his career, making homemade jerseys with his number, collecting Braves caps every chance I could get and keeping a scrapbook documenting his progress against the Babe even as he dealt with the racist conversations directed toward him.

My brother and I had an interesting “brush with greatness” moment with Hammerin’ Hank, our childhood hero. It was 1972 and our family was in Atlanta visiting family at the same time the MLB All-Star Game was hosted at Atlanta’s Fulton County Stadium. As part of the All-Star festivities, Hank Aaron and Willie Mays made an appearance on the steps of the Crystal Pistol at Six Flags Over Georgia. Kids could walk up and stand with them while their parents took their picture. We were at Six Flags that day and we had a chance to have that opportunity. It was great fun for those baseball greats to greet us with their hands on our shoulders. Then,…

Once we were back home to Bristol a few days later, our hometown newspaper ran photos of the All-Star festivities in Atlanta. As we opened the paper we saw Aaron and Mays smiling for a photo as a photographer behind them asked them to turn. It just happened to be the very time my brother and I were standing there with them. We saw that picture and said, “That’s us!” My Mom contacted the paper and they re-ran the photo with the caption you can see in this clipping.

That was such a fun day to be able to be that close the Hank Aaron. Today, I remember the grace with which he played the game and was a good role model on the field for those of us who watched even as we pray for his family in their grief.

As exciting as it was to have that “Hammerin’ Hank brush with greatness,” the most exciting “brush with greatness” I have experienced actually happens every single day as I open the Bible and sit in the presence of the Holy Spirit and watch the Spirit teach me anew the words of Jesus. We so enjoy the impact of the lives of our human heroes but, oh my goodness, the impact of taking time to be with Jesus every day far surpasses that joy. The joy is surpassing because we were created to be conformed to the image of Jesus (Romans 8:29) so when we sit with him and walk with him and think with him and trust in him, we become more like him — and that’s our reason for being here in this life. It’s the way we swing for the fence of discipleship by the power of the Spirit, round the bases of daily life with the devotional agility of Jesus, and make our way home to the presence of the Father for today and for always!