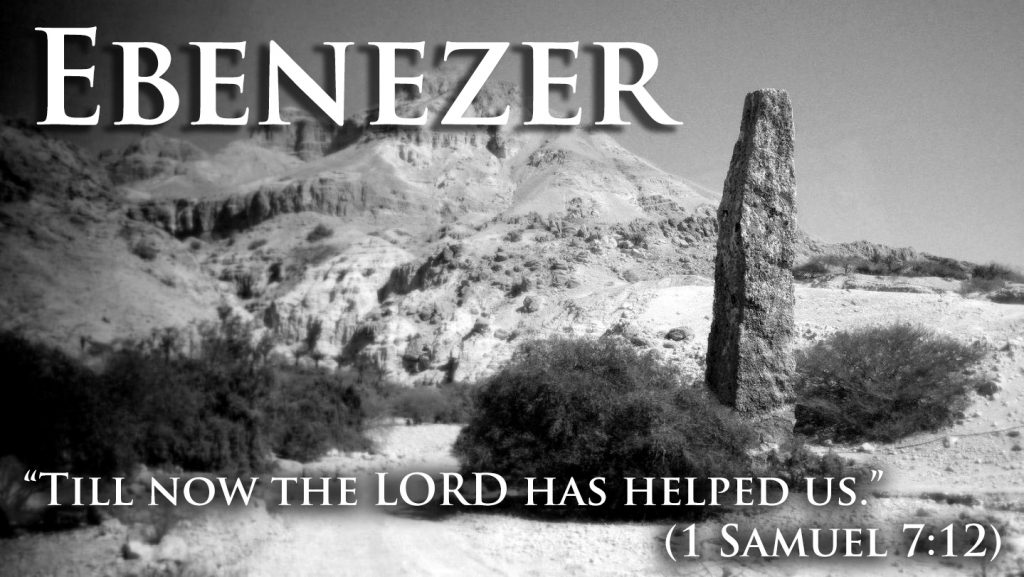 Bible-reading folks have sung the hymn and recalled the story of Samuel the prophet setting up a pile of stones to mark a milestone of faith. Those stones were meant to commemorate God walking with, caring for, empowering and leading his people across a difficult journey. So, Samuel raised an “Ebenezer” – a Hebrew word that means “stone of help” – as a monument to call everyone to renewed commitment to trust in God for the journey of life. Samuel said, “Thus far has the Lord helped us.” God had brought them that far. He’d keep bringing them, if they’d but trust him.

I believe the reason our nation is called to remember Martin Luther King, Jr.’s speech from the steps of the Lincoln Memorial on August 28, 1963 is because Dr. King raised an ‘American Ebenezer’ in the heart of our nation’s capital that day. In his dramatic speech, in front of the statue to the President who signed the Emancipation Proclamation as a beacon of hope for “Negro slaves who had been seared in the flames of withering injustice,” Dr. King declared that the defeat of racism in our country would “hew out of the mountain of despair a stone of hope.” And, thus, his speech continues to stand today as a “stone of hope,” our Ebenezer, God has brought our nation thus far and if we trust him he will keep bringing us to be a people lifting high the rights of life, liberty and the pursuit of happiness for every person from the Carolina coasts to the California shores.

Several years ago, our church youth choir served around Atlanta, Georgia through several neighborhood mission projects and musical presentations. While there, we spent a day at the Martin Luther King, Jr. National Historic Park and we were able to sit in the pews of the Ebenezer Baptist Church where Dr. King’s father was Pastor and where King himself was baptized, ordained and buried. As we sat there and listened to the Park Ranger explain the history of the church and its significance in the Civil Rights movement, he posed a question that he thought to be straightforward though it was perplexing as well. He asked, about King’s nonviolent methods of protest, “Who do you think most influenced Dr. King’s views and strategies?”  Of course, we had just walked by a statue of Mahatma Gandhi outside the entrance to the park’s welcome center and it is well-known of King’s study of the Indian leader’s impact upon the racial discrimination of his own nation, but surely that was not the answer the Ranger was looking for.  Surely not, with the image of Jesus just behind him depicted in stained glass high above the choir loft praying “not my will but Thine be done.”  But, yes, the Ranger wanted ‘Gandhi’ as the answer to his question though I knew in my heart (and from my reading) that both Gandhi and King found their motivation for action from the life of our Lord Jesus. Ebenezer Baptist Church was the place from which Dr. King heard the message and proclaimed the message, “thus far has the Lord helped us!” God has brought us this far. He’ll keep bringing us, if we’ll but trust him, praying “not my will but Thine be done.”

On that August day in Washington, King declared, “1963 is not an end but a beginning!” God had brought our nation that far toward the end of racism. He’d keep bringing us toward brotherhood with our neighbors, if we’d but trust him.  As God looked down across the years of human interaction and called his people to be concerned about their neighbors, all of them, King astutely declared injustice to be “withering” as he raised the Ebenezer that day. And withering it is because God intends for it to wither. But, it withers in our nation when first it withers from within the hearts of our citizens.  That being so, we do well to hear Dr. King’s speech knowing that 1963 was a beginning as we embrace his call to the “urgency of now.”  He said that day, “Now is the time to lift our nation from the quicksand of racial injustice to the solid rock of brotherhood.”  Now is the time to meet bitterness and hatred and violence with the trust that just as God has brought us this far, he will keep bringing us into his vision for what human interaction is to be.  As King put it that day, “let us meet physical force with soul force.” ‘Soul force!’ — Trusting God to change our hearts and our nation.  This is what dreams are made of.

11:00 a.m. — One week delay broadcast locally of both services on Spectrum Cable Channel 9