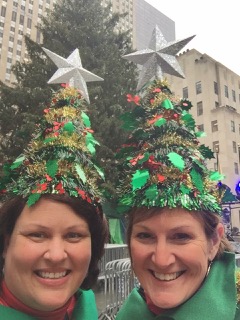 (A look inside the history of #NYCTreeGirls)

It all began four years ago. Both of our sons played bass in the Shelby Middle School orchestra. The opportunity arose that I would introduce myself to Carol Ann Hoard. We had many of the same friends but had never actually met before. We hit it off immediately, and I discovered she had helped to counsel students after the death of our son, Tripp, in 2012, and I never knew it. I also found out that she loved the TODAY show!

Fast forward three years from the time we met. Carol Ann’s father
had recently passed away, and Christmas, which was once a joyful
season for me, had become a time of memories and sadness. I think
many folks can relate. Carol Ann suggested we go to New York City
to the Rockefeller Center tree lighting. She had been once before;
however, I had never been. The catch? She wanted to dress as
Christmas trees!

“I’m going to New York? Dressed as a tree? And leave my family on what would be our son’s 21st birthday?” My family immediately said, “Yes, go Tisha!”

And so the #NYCTreeGirls we’re born.

As we walked around the city dressed in festive tree costumes, we
saw grouchy faces turn into smiles. We repeatedly heard, “You’ve made my day.” The season that had been one of darkness and dread turned into one of absolute joy!

I do believe God puts others in our path when He sees it necessary.
When Carol Ann came into mine, I had no idea how much her
laughter, silly antics, thoughtfulness and child-like spirit would be
just what I needed. During this holiday season I am thankful for
God’s blessing of friendship. We are all fortunate beings who have
the opportunity to have friends, but also be a friend to others when
they need us the most.