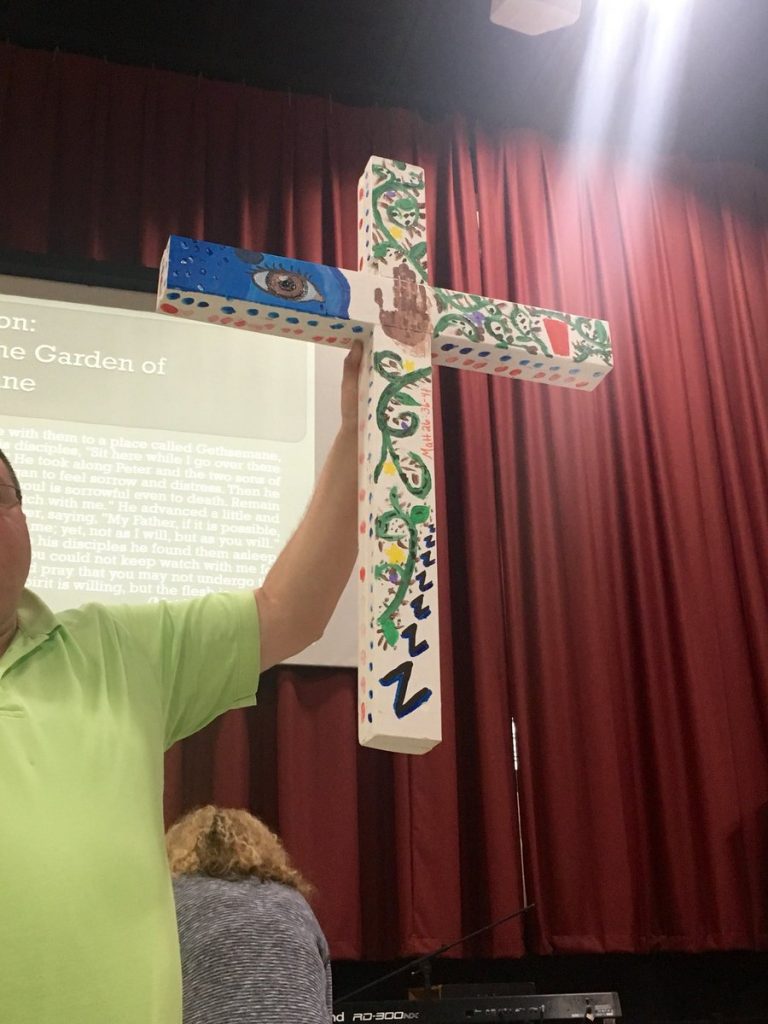 During Holy Week this year, our church family joined together for an Inter-generational Holy Week Prayer Experience during which we painted our interpretations of the Scripture passages below.  The crosses were built by our youth and used wood stripped from the demolition from our Sanctuary and Youth Center construction projects.

First Station: Jesus in the Garden of Gethsemane 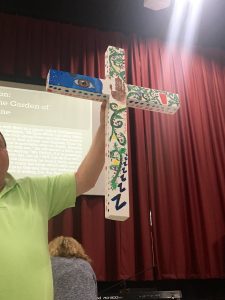 Then Jesus came with them to a place called Gethsemane, and he said to his disciples, “Sit here while I go over there and pray.” He took along Peter and the two sons of Zebedee, and began to feel sorrow and distress. Then he said to them, “My soul is sorrowful even to death. Remain here and keep watch with me.” He advanced a little and fell prostrate in prayer, saying, “My Father, if it is possible, let this cup pass from me; yet, not as I will, but as you will.” When he returned to his disciples he found them asleep. He said to Peter, “So you could not keep watch with meforone hour? Watch and pray that you may not undergo the test. The spirit is willing, but the flesh is weak.”

Then, while [Jesus] was still speaking, Judas, one of the Twelve, arrived, accompanied by a crowd with swords and clubs, who had come from the chief priests, the scribes, and the elders. His betrayer had arranged a sign- 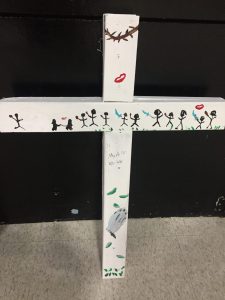 al with them, saying, “the man I shall kiss is the one; arrest him and lead him away securely.” He came and immediately went over to him and said, “Rabbi.” And he kissed him. At this they laid hands on him and arrested him.

Third Station: Jesus is Condemned by the Sanhedrin

When day came the council of elders of the people met, both chief priests and scribes, and they brought him before their Sanhedrin. They said, “If you are the Messiah, tell us,” but he replied to them, “If I tell you, you will not believe, and if I question, you will not respond. But from this time on the Son of Man will be seated at the right hand of the power of God.” They all asked, “Are you then the Son of God?” He replied to them, “You say that I am.” Then they said, “What further need have we for testimony? We have heard it from his own mouth.” 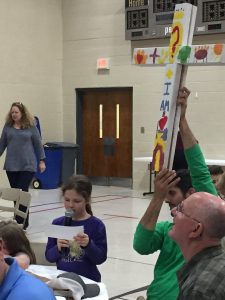 Now Peter was sitting outside in the courtyard. One of the maids came over to him and said, “You too were with Jesus the Galilean.” But he denied it in front of everyone, saying, “I do not know what you are talking about!” As he went out to the gate, another girl saw him and said to those who were there, “This man was with Jesus the Naz

arene.” Again he denied it with an oath, “I do not know the man!” A little later the bystanders came over and 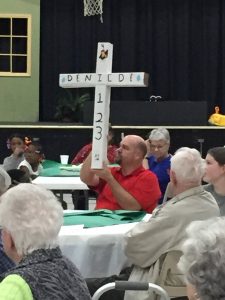 said to Peter, “Surely you too are one of them; even your speech gives you away.” At that he began to curse and to swear, “I do not know the man.” And immediately a cock crowed. Then Peter remembered the word that Jesus had spoken: “Before the cock crows you will deny me three times.” He went out and began to weep bitterly.

The chief priests with the elders and the scribes, that is, the whole Sanhedrin, held a council. They bound Jesus, led him away, and handed him over to Pilate. Pilate questioned him, “Are you the king of the Jews?” He said to him in reply, “You say so.” The chief priests accused him of many things. Again Pilate questioned him, “Have you no answer? See how many things they accuse you of.” Jesus gave him no further answer, so that Pilate was amazed…. 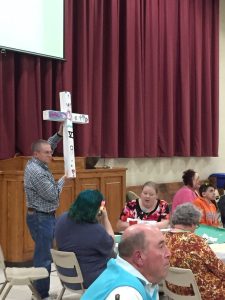 Pilate, wishing to satisfy the crowd, released Barabbas… [and] handed [Jesus] over to be crucified.

Sixth Station: Jesus is Scourged and Crowned with Thorns

Then Pilate took Jesus and had him scourged. And the soldiers wove a crown out of thorns and placed it on his head, and clothed him in a purple cloak, and they came to him and said,”Hail, King of the Jews!” And they struck him repeatedly. 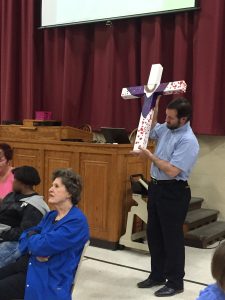 When the chief priests and the guards saw [Jesus] they cried out, “Crucify him, crucify him!” Pilate said to them, “Take him yourselves and crucify him. I find no guilt in him.” … They cried out, “Take him away, take him away! Crucify him!” Pilate said to them, “Shall I crucify your king?” The chief priests answered, “We have no king but Caesar.” Then he handed him over to them to be crucified. So they took Jesus, and 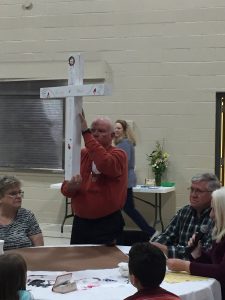 carrying the cross himself he went out to what is called the Place of the Skull, in Hebrew, Golgotha.

Eighth Station: Jesus is Helped by Simon the Cyrenian to Carry the Cross

They pressed into service a passer-by, Simon, a Cyrenian, who was coming in from the country, the father of Alexander and Rufus, to carry his cross. 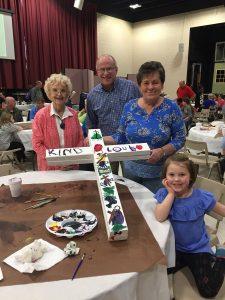 A large crowd of people followed Jesus, including many women who mourned and lamented him. Jesus turned to them and said, “Daughters of Jerusalem, do not weep for me; weep instead for yourselves and for your children, for indeed, the days are coming when people will say, ‘Blessed are the barren, the wombs that never bore and the breasts that never nursed.’ At that time, people will say to the mountains, ‘Fall upon us!’ and to the hills, ‘Cover us!’ for if these things are done when the wood is 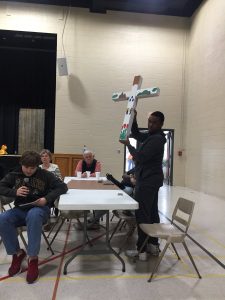 green what will happen when it is dry?”

When they came to the place called the Skull, they crucified him and the criminals there, one on his right, the other on his left. [Then Jesus said, “Father, forgive them, they know not what they do.”] 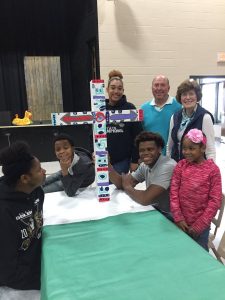 Eleventh Station: Jesus Promises His Kingdom to the Good Thief

Now one of the criminals hanging there reviled Jesus, saying, “Are you not the Messiah? Save yourself and us.” The other, however, rebuking him, said in reply, “Have you no fear of God, for you are subject to the same condemnation? And indeed, we have been condemned justly, for the sentence we received corresponds to our crimes, but this man has done nothing criminal.” Then he said, “Jesus, remember me when you come into your kingdom.” He replied to him, 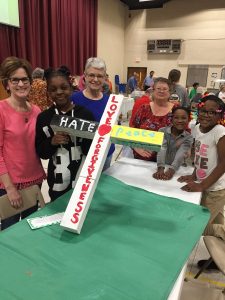 “Amen, I say to you, today you will be with me in Paradise.”

Twelfth Station: Jesus Speaks to His Mother and the Disciple 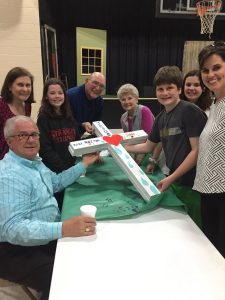 It was now about noon and darkness came over the whole land until three in the afternoon because of an eclipse of the sun. Then the veil of the temple was torn down the middle. Jesus cried out in 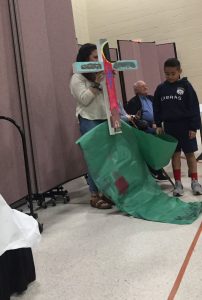 a loud voice, “Father, into your hands I commend my spirit”; and when he had said this he breathed his last.

Fourteenth Station: Jesus is Placed in the Tomb

When it was evening, there came a rich man from Arimathea named Joseph, who was himself a disciple of Jesus. He went to Pilate and asked for the body of Jesus; then Pilate ordered it to be handed over. Taking the body, Joseph wrapped it [in] clean linen and laid it in his new tomb that he had hewn in the rock. Then he rolled a huge stone across the entrance to the tomb and departed. 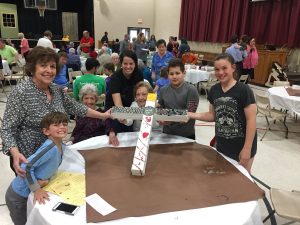 [Thanks to Carol Ann and Chloie and our youth for getting things ready for this experience and for Missy preparing the station readings for us.]