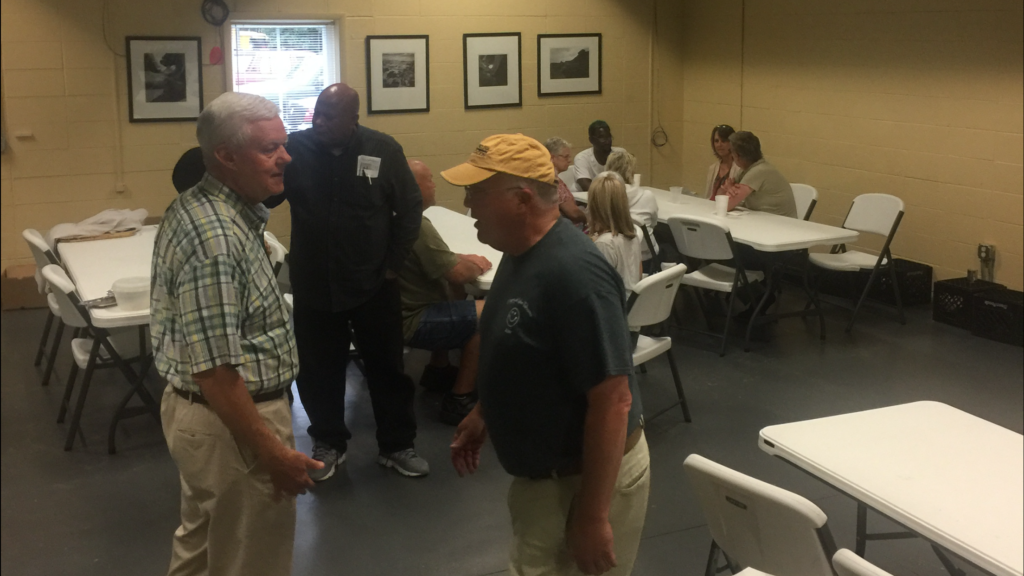 By Tina B. Still

Tonight our Sunday school class volunteered to serve dinner at the men’s homeless shelter in Shelby. Class members from Mike Harden’s Sunday School Class gather for conversation as the men come in for the evening meal.

This simple experience is a humbling and especially rewarding mission.  Over the past five weeks, author, Max Lucado has led our class through the first five verses of the 23rd Psalm.  How appropriate that our lesson today focused on Psalm 23:5—“You prepare a table before me in the presence of my enemies.”  We discussed at length what this particular verse means to us.  The general consensus was that Christ’s desire is to commune and fellowship with us in spite of our sin; and that He prepared the ultimate table for us with His broken body and shed blood.  He so desires to bestow upon us, as His precious children, His mercy, His forgiveness, and His grace.  Christ’s love for us is overwhelming.   We know from John 10:10 that our enemy, Satan, desires to steal, kill, and destroy but God’s purpose is to give life in all its fullness. But, what does that look like?   This evening at the shelter I felt Gods presence, I felt His warmth, and I felt His calming peace as I shared a meal with a group of homeless men.

I had some rather in-depth discussions with two men about life and how they ended up at the shelter.  As I sat across the table from the first man, he noticed that we were both “lefties” (left-handed), and questioned me about creativity and musical inclinations stating that he felt this was common among lefties—I stated I really had neither!   He shared that he was musician years ago, playing bass in a band with Patty Lovelace before she “hit it big” in Nashville. He then shared how, after a series of misadventures, he had been evicted from a home he shared with family in Lincolnton and that he was now completely alone and had nowhere else to go.  He said, “about the only thing I have left in this world is hope.”  This was very reassuring as his hope was in Jesus Christ. The second man was a young man around the same age as my son–30 or so with a bushy, unkempt, goatee and a kind, but shy, smiling face.  I asked him how he ended up at the shelter and I mistakenly thought he said eviction and started to question him about his home-life and then we both laughed when he corrected me stating he was at the shelter because of his addiction, not eviction!  Oh…my ignorance.  He went on to state that he had been clean for 48 days—praise the Lord!  He talked about family struggles and how he fights his drug urges every day. He shared that two years ago he lost his wife of 11 years to cervical cancer. By the time she was diagnosed, she was already at stage IV cancer and when she died he was devastated and just felt lost.  He went on to share that he was so inward focused (his words) that he completely failed his then 8 year old son. He said “my son, at eight, handled her death much better than I did—I allowed drugs to numb my pain and I needed to avoid experiencing the loneliness and emptiness of her death…drugs did that for me.”  He explained to me that if he was a good man, with coping skills and free of drugs, that he could be a good father to his son and break the cycle of abuse that he knew all too well.  He wants his son to have a good, happy, and productive life.

Isn’t that what we all want?  I said to him, “Interestingly enough, I know those feelings of grief all too well—I too lost a life partner about 10 years ago.” I shared with this young man how I sought professional grief counseling.  I shared how I wanted to know the five stages of grief — denial, anger, bargaining, depression and acceptance —  because I wanted to check them off my list as though I could just “make all the pain go away” by checking the box with each emotion.  We both laughed as we shared a moment of mutual understanding and empathy.  In that very moment, it felt as though we were just two “regular” people sharing the pain of loss and the empty finality of death.  It seemed, in that brief moment, we had both forgotten the homelessness and the loneliness of the shelter.  God was in that moment.

God calls us to be the salt of the Earth—to bring balance and hope to a lost and dying world. Spices, especially salt, are best used to accent a dish rather than standout on their own—tonight our class was “just a big salt shaker”—hoping to enhance the flavor at Gods table.